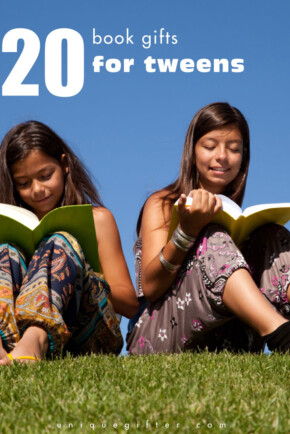 “There are many little ways to enlarge your child’s world. Love of books is the best of all.” – Jacqueline Onassis.

Books… They open doorways to different worlds, full of imagination and wonder.

At such a young age, tweens might not really be interested in reading – They have better things to do. However, give any one of these books to a tween, and I promise you they won’t be able to put it down until it’s done, and then they’ll be wanting more!

From the magical world of Harry Potter, to the strange and scary world of Narnia, these books are the perfect gift for any book-loving tween.

1. Harry Potter and the Sorcerer’s Stone

No introductions needed here. First on our list is the magical world of Harry Potter. This 7 part series will captivate the imagination of any reader, regardless of age. However, this first book is perfect for getting into the Potter world at a young age.

Perhaps you haven’t heard of this one. This is the first book in the Wardstone series, which follows the work of a Spook and his apprentice, as they travel around England dealing with all kinds of strange and dangerous creatures, such as witches and boggarts.

Believe it or not, that Multi-billion dollar movie francais all came from this book. It’s a perfect read for any young reader, which alongside the movie adds a much richer experience of the world.

This first parter of the best selling series Percy Jackson and the Olympians, follows the life of young Percy Jackson, as he begins to learn that he has powers others could only dream about.

5. Charlie and the Chocolate Factory

The Roald Dahl classic is a perfect gift for any tween. Who wouldn’t want to tour around the greatest chocolate factory in the world and to eat everything it has to offer?

Another of Roald Dahl’s classics, Matilda is an extremely gifted girl, who is misunderstood by her parents. Children will most definitely be able to relate in some way to this book, making it a great gift.

The last of Roald Dahl on this list. The Big Friendly Giant features a young girl who discovers a new friend one night – A giant!

This award winning book by Jeff Kinney follows the life of young Greg as he tried to adapt to a new school. With little friends, and being rather socially awkward, he doesn’t have the best of times.

This complete collection of Narnia is the perfect gift for any young person. Let them dive into the strange and wonderful world full of mystery and danger.

The adventure novel by Robert Louis Stevenson is perhaps one of the greatest classics. Following the captain’s treasure map, the pirates search for lost gold and treasure. An exciting tale for any tween.

The Bad Beginning is book one of this series, which is about three orphans who have some rather bad luck, starting with their parents deaths.

Ah, the Twilight Saga. The first book in the series is an amazing gift for any tween. If you don’t know anything about Twilight, it follows the young Isabella Swan, who after moving to a new town with her father, falls in love with Edward Cullen, who she finds out to be a vampire.

This hilarious, but spooky book is a tale about Hansel and Gretel who roam around in a forest and discover some scary things.

When the castle Hangnail looks for a new witch, twelve year old Molly applies for the position. Even though she is so young, she assures the “Board of Magic” she is quite capable of doing what they want. However, Molly isn’t everything she seems.

This stunning work by J.R.R Tolkien is the best way to get into his world. The hobbit is a light-hearted book about a hobbit named Bilbo Baggins, who finds himself in the company of dwarfs and a wizard whose quest is to raid the gold hoard of a fearsome dragon – Smaug.

The first part of the Inheritance cycle, Eragon is a great book for any reader. With dragons and magic, the story follows a boy named Eragon, who is sent a Dragon egg. Together, him and his dragon become the first free Dragon Rider in an era.

A young boy named Ben sets out on a magical journey to find peace for his dragon friend. A captivating read for any young reader.

This great book introduces us to Merlin, a young wizard who is destined to become the greatest wizard of all time.

Princess Winter is said to be both beautiful and kind. With her allies, she seeks to start a revolution, and win a long and devastating war.

These young lovers know that the chance of their relationship lasting is slim – But they will try and do everything they can to make it work.

Anne is the head gift giver here at Unique Gifter. She loves figure skating, studying wine, and dreaming up amazing gift ideas for all occasions.
This website uses cookies to improve your experience. We'll assume you're ok with this, but you can opt-out if you wish.Accept Read More
Privacy & Cookies Policy