The Nineties were a misunderstood and underappreciated decade, similar to the Eighties. This list of collectable items, forgotten beloved toys, shows, and games, aims to rectify that problem.

Show your love for one of the best bands to hit the American music scene in the past 50 years. Most 90s kids know where they were when Kurt Cobain died. Happily, his music lives on.

The craze that surrounded beanie babies seemed like it would never end. Happily it did after many people spent thousands on these collectable stuffed animals.

While not the most gorgeous coloring book ever made, spend some time going down memory lane with this well though-out coloring book that celebrates the 90’s. It will have you laughing (and remembering) all that the Nineties had to offer

For the rabid Saved By the Bell fan, get comfy with Zack Morris.

Enjoy the simple magic of Silly Putty. We’re not quite sure what it is, but in any case it’s a lot of fun to play with.

Gift the new parent in your life a trip down memory lane with this set of Telly Tubbies. It includes our personal favorite “Tinky Winky.” After their initial “you shouldn’t have” the new parent will have hours of fun playing with their kids and these toys while wondering why did people stop loving this sweet plush toys?

These bracelets haven’t really ever gone out of style. They make a simple and fun party favor that provides at least 15-20 minutes of mindless fun. This set are lit by LED lights so that you can wear them at your next party or at night.

8. As If! The Oral History of Clueless

If you’re a fan of the movie Clueless then this will be the ultimate gift for you. A collection of interviews by the director, cast, and crew that talks about how Clueless became the epic cultural hit that it did.

If you have a small place in your home for an extra stuffed animal, then Rainbow Dash from My Little Pony should be what you pick up next. Bright aqua blue with its signature lightening bolt on it’s rump, this is a great stuffed animal for a little one needing a new stuffed toy to love or for the kid at heart.

For the lover of 90210’s resident bad girl, the soft blue “Don’t Be a Brenda” t-shirt is great worn ironically under a fitted jacket or with a pair of cute jeans and ballet slippers.

There are still a number of people trying to figure out what Pogs are, for those of you who actually know how to play the game of Pogs this classic game kit is for you.

Before hoverboards there were inline skates. For those of you would still like to work out inline skates are a more fashionable option to the old-fashioned roller skate.

If you read Goosebumps the books, then this game is for you. Created with the fan in mind spend an hour or two playing this game.

There are a lot of scents that people enjoy smelling: fresh flowers, clean laundry, and Mr. Sketch Scented markers. Yes, there are fans of the markers which range in smells from mint to cinnamon. Use these when coloring your 90’s coloring book!

Technically, Where’s Waldo came out in the late 80’s but he was still going strong when the 90’s hit and you still will find people dressing up as Waldo on Halloween.

Daria was the perpetually angsty teenager in the hit animated show Daria. This t-shirt shows her disgust with the world at large. 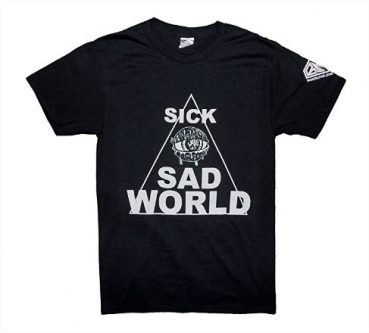 These cute little figurines were considered good luck in the 90’s . They were also a lot of fun to have on your desk so that you could play with them during long meetings. Each comes with a large tuft of brightly colored hair that goes crazy when you twirl your troll in between your hands.

There was a time when scrunchies were considered a fashion staple. Keep your hair out your eyes when hiking, biking, or working out with a scrunchie today!

19. Pinky and the Brain T-Shirt

This well made t-shirt showcases the “brains” of the operation from the show Pinky and the Brain. Two lab rats that start out every evening deciding what they’re going to do-usualy the plan is to take over the world. Declare who the brains are in your group with this t-shirt.

You can never have to many pairs of socks. And you will feel extra powerful and bubbly rocking this pair of bright anklets.

Don’t be afraid of your 90’s love embrace it and have fun.

Michelle is a recovering shopaholic who is channeling that shopping energy into helping you find the perfect gifts for the special people in your lives. You can find her at Michelle is Money Hungry.
This website uses cookies to improve your experience. We'll assume you're ok with this, but you can opt-out if you wish.Accept Read More
Privacy & Cookies Policy