I’d be willing to say that most of the human race has seen The Nightmare Before Christmas, and I’m not sure I’ve ever met anyone who has seen the movie and wasn’t a fan! One of the most popular movies that Disney has had a hand in, The Nightmare Before Christmas, has spawned a veritable plethora of merchandise and for a good reason. There’s no way that you can watch this movie and not want to own a memento of the lovable characters!

The Nightmare Before Gift Giving

As I stated earlier: There’s a ton of merchandise when it comes to The Nightmare Before Christmas, and it’s going to be pretty intimidating searching for that perfect gift, and that’s why I’ve come to your rescue with this list! I’ve scoured the depths of internet retail to bring you the best of the best when it comes to TNBC gifts, and you’re sure to find something amazing in this list of gifts for Nightmare Before Christmas fans.

Monopoly: The Nightmare Before Christmas Edition

I mean, who doesn’t like Monopoly, right? You really can’t beat this awesome 25th-anniversary edition of the game either. A real collector’s piece!

What a cute way to lounge around and sleep, right? These pajamas are sure to warm even the iciest little goth fan’s heart!

The Nightmare Before Christmas Coloring Book

Personally, I’m a huge fan of coloring and a pretty big fan of TNBC myself, and this is a prime coloring book! I’d be willing to wager the majority of the pictures will be blacks and greys, but it’ll still be awesome.

There’s a Funko Pop for everything, I swear! I’m certain any fan is going to love this one because it’s such an iconic moment, and you really can’t go wrong with Funko Pops. Be right back, ordering mine!

Not just one gift but four! Some of the most popular characters are featured with this, and as a fan of Oogie Boogie, I’ve gotta say that I’m pretty happy to see him represented as well!

Any fan worth their salt is going to own the film in some shape way or form, right? What about the book, though? Written and illustrated by Tim Burton himself, this gift is sure to be cherished!

As I stated before: There’s a big chance that the fan in your life already owns the film, but do they own the sing-along version?! This Blu-Ray edition actually includes the theatrical version as well, so you really can’t beat this deal!

Monopoly isn’t for everyone; I’ll be the first to admit that. For fans of the franchise that prefer a more complex and involved game, there’s this beautiful collector’s edition Chess set!

Hallmark brings another masterpiece of an ornament! Featuring Jack Skellington as Sandy Claws, he’s visiting kids everywhere this year in his coffin sleigh and skeletal reindeer!

This wallet is as stylish as it is awesome! Featuring the characters from the franchise portrayed in a Chibi art style, this is a fresh take on an old film and is guaranteed to thrill any fan.

The wonderful thing about Nightmare Before Christmas merchandise is that it all looks so COOL! This laptop bag is definitely no exception. To match with the spiderweb design, the zippers even have little metal spiders on them! Awesome.

Jack and Sally are one of the most iconic romances of animated tales, and this pendant definitely showcases that. With a cool and unique crescent design, giving this to that special someone is sure to make them absolutely ecstatic!

There’s gotta be a fan in your life that wants TNBC all over everything they own, including their car’s interior, right? This insane setup comes with all 10 pieces! Floormats, steering wheel covers! Just about everything is covered!

Everyone has that pair of slippers that they just absolutely love, right? Maybe your friend or family member doesn’t, and you can introduce them to these awesome-looking and cozy bad boys here!

What fan wouldn’t want their very own Zero? You can make that dream come true with this awesome looking hanging prop! Make every visit to your fan’s living room a visit to Halloween Town itself.

The Nightmare Before Christmas Cookbook (Hardcover)

Got a friend that needs some spooky food ideas for their next Halloween party? Even just making them for novelty’s sake really! This cookbook has over 25 recipes inspired by the beloved movie!

The Nightmare Before Christmas Shower Curtain

Shower time has never been so excellent as it is with this shower curtain! Anyone who loves the franchise is going to love the splash of Halloweentown that it brings to their bathroom!

This cool-looking cookie jar is guaranteed to look fabulous in your fan’s kitchen. Showcasing the many different expressions of Jack Skellington, I’m not sure if it’s supposed to be more spooky or snazzy. There’s gotta be a word for that, right?

Very cool dress, right? Now, the description says that it’s technically a costume dress, but the fan in your life can go ahead and wear it any time they want. Who am I to judge?

Everyone needs a piggy bank, right? This one is pretty snazzy looking and highly detailed. Made from durable PVC, it even doubles as a bust if you aren’t too keen on saving change!

The Nightmare Before Christmas Magnet Set

What can you say, really? Magnets are awesome and so is The Nightmare Before Christmas. This package even comes with a 16-page sticker book. Put Jack and Sally on all the things!

The Nightmare Before Christmas Socks

There isn’t a single person out there that doesn’t need or appreciate a decent pair of socks. When socks are this fashionable, you’d be hard-pressed to find a cooler gift, to be honest.

Who doesn’t love laying around in a comfy pair of pajama pants? Bet the fan in your life loves it, even more, when they are as impressive looking as these. I’m likely to get a pair for myself!

Do you know a fan that loves the franchise but doesn’t exactly like dark colors or doesn’t want cartoon characters plastered all over their handbag? I’ve got you covered. This low-key purse is the perfect way of showing love for the series and being a bit more on the classy side!

I’ve shown you the sweet-looking purse. Why not snag the matching wallet to go along with it? Maybe the loved one you’re getting the gift for would rather carry a nifty wallet than a purse? Either way, this is one awesome gift!

Sometimes the best gifts are some of the simplest! This rad little keychain features Jack Skellington in his cozy coffin bed and is bound to look great on any set of keys!

Whether your loved one enjoys stacking bracelets for style, likes a variety of accessories, or even wants to share the awesome gifts with friends, this pack of five bracelets is certain to get a smile out of them.

As I previously stated: I’m a big fan of Oogie Boogie and everything along with him. This t-shirt is a twofer because it includes the iconic hill scene and one of the coolest movie villains ever!

There are quite a few fans of the terrifying trio that is Lock, Shock, and Barrel, and this gift is definitely for them! Featuring the three in their walking bathtub, this figurine is made from high-quality resin and is even handpainted.

The mayor is a weirdo, right? Weirdo or not, he was still really cool looking. The animation alone makes me want to pick this up for myself as a sweet collector’s piece.

Speaking of weirdos: Dr. Finkelstein was another one that was just super odd in the flick. He did have a really cool observatory, though, right? Now the fan in your life can have that impressive observatory themselves!

Oogie Boogie makes another appearance on the list! This hat is pretty snazzy if I do say so myself. It’s officially licensed by Disney, so you know it’s likely well made, and it even has a little spider dangling from it!

What household is truly complete without a salt and pepper shaker? Especially a kitschy one like this!

These leggings are so cool that I’d be tempted to buy them for myself if I could pull them off. I’m not sure what would put a bigger smile on a fan’s face: These leggings or the thought of a 6’3, 250lb bearded man wearing these leggings. Either way, it’s worth the buy!

I immediately loved this bag as soon as I laid eyes on it! It’s low-key but manages to portray the love for the franchise all the same. A very cool and roomy bag for sure!

We’ve colored wallets for the ladies, and now it’s time to bring one out for the fellas! This snazzy wallet has the iconic Nightmare Before Christmas color scheme. Classic black!

Nightmare Before Christmas fans have no trouble with showing off their adoration for the film, and this decal is likely to be slapped on just about anything. Who wouldn’t want Jack in his thoughtful pose on their back windshield? 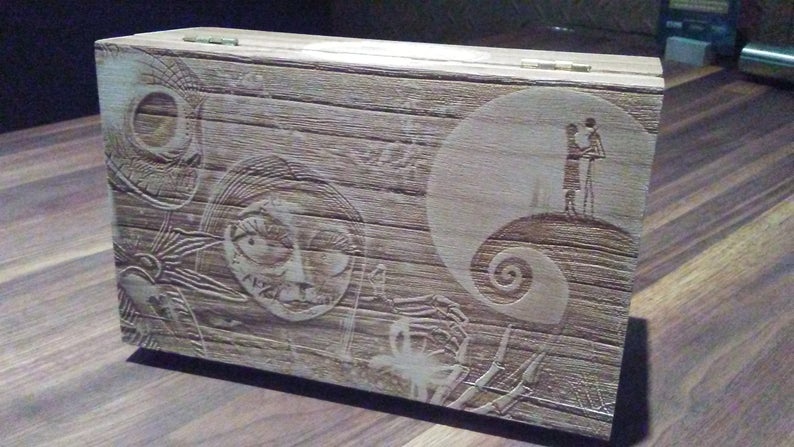 We all need a place to put our jewelry and trinkets and what a fabulous place to store them! This handmade wooden box has different Nightmare Before Christmas related designs etched into it and looks absolutely stunning! 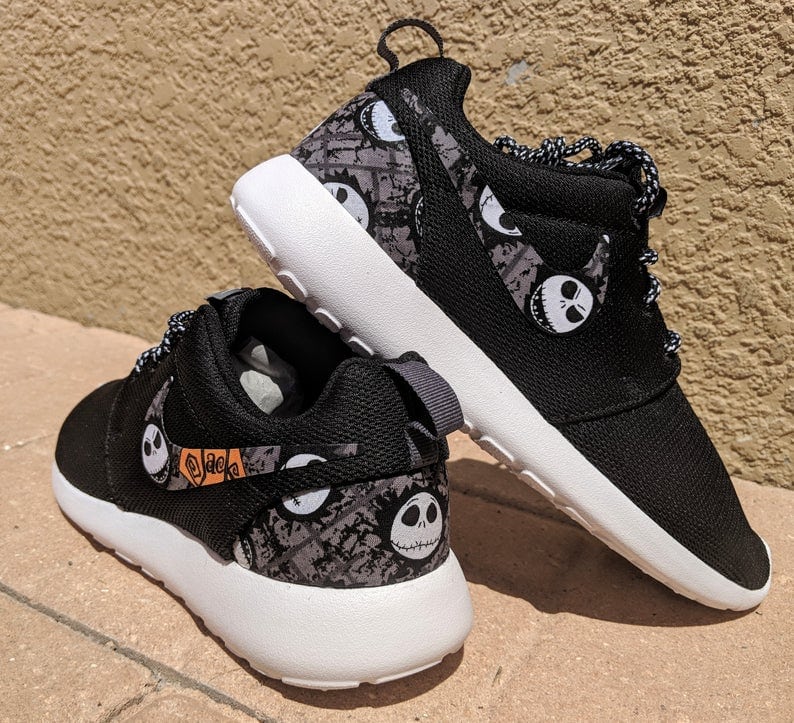 Last but most certainly not least, these outstanding custom Nikes. Not only is the custom job they do on these insanely sweet, but you can also have the color of the shoes and the soles customized. Nice!

We’ve completed our journey through Halloween Town and made it back on the other side unscathed, but hopefully with an arm full of goodies for friends and family! Did you find anything on the list that the fan in your life has gone nuts over? Maybe you found something that you ended up snagging for yourself! Feel free to let us know on Twitter (@ugifter) or even on Instagram (@uniquegifter), and thanks for checking out Gifts For Nightmare Before Christmas Fans!