How British Weddings are Different - Unique Gifter Skip to content 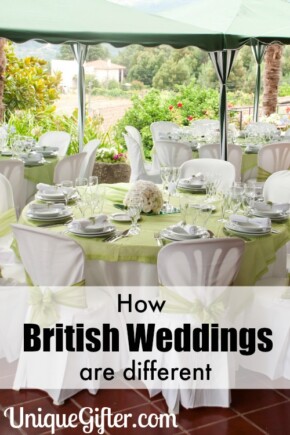 We speak the same language but we live in different worlds… There are significant cultural differences between us and the Brits and they go beyond the jam v jelly, “couldn’t/could care less” chasms that exchange students love to debate.

Despite these yawning gulfs, Transatlantic love often thrives. If you’re lucky enough to be invited to (or indeed be one half of) a UK wedding, here’s a few things you should know before you order the big hat and practice your regal wave.

This often comes as a shock to unprepared American brides making their vows in Blighty, but there’s no rehearsal dinner hosted by the in laws-to-be. Not only is there no dinner to celebrate the rehearsal, but the rehearsal itself is something of a low-key affair, often attended by a skeleton staff of parents, attendants and the vicar. Usually in a church – an old church – which brings us to…

The reception venue may be older than the USA

That’s right, some of these old manor houses and village halls date back to the fifteenth century and maybe even earlier. They attract wedding parties because they go beyond the merely functional, providing atmosphere and a sense of occasion. The Brits love their traditions and this can sometimes force you to change your plans to accommodate them. You might find that you can’t hire a barber shop quartet because “The House” feels it’s Non-U (low class), so you have to opt for a string quartet instead.

Not all places are as rigid as this, though, with some venues catering for couples who want something different. There’s Heaton House Farm, a north-west wedding venue that welcomes couples of all faiths, for example. However, if you’re tying the knot at a more traditional place, just step back and let them do their thing – they know what they’re doing!

There are fewer wedding attendants

Those Brits – so understated. This includes the wedding industry, which is nowhere near as “big” as it is in the USA. In some parts of the States a bride can have 10 or more bridesmaids, but in the UK, four is considered over the top and showy.

The house of Usher

No, this doesn’t mean that your British wedding is a horror story; usher is what the Brits call groomsmen. They do exactly the same thing – guiding guests to their seats and handing out the programs (or programmes).

The reception somehow isn’t a minefield

UK weddings tend to follow the same pattern – there’s the ceremony, the breakfast (which is the first meal after the ceremony, regardless of the time of day), then a break of a couple of hours before heading to the reception venue. This is where you see British diplomacy in action, because some people only get into the reception, not the inner sanctum (as it were) of the ceremony and breakfast. We don’t know how they do it, maybe it’s some kind of Harry Potter witchcraft, but they seem to be able to have this A-list and B-list scenario without too much bloodshed or tears. Ya gotta love ‘em.